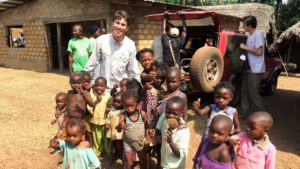 Students return to Sierra Leone to finish what they started

For more than 30 years, the Dele Village Learning Center in Lower Allentown has provided an education for hundreds of children in the growing
community outside Sierra Leone’s capital. And for years, the school has struggled to provide affordable clean water for its students and staff.

The school’s current rainwater catchment system is able to provide water for sanitation uses, but is only useful during the area’s six-month rainy
season. Purchasing bagged water or well water from a nearby community was the only way to provide what was needed for drinking, cooking and
washing.

“It was a financial strain and became a burden to the school’s budget,” said John Merrill, a senior studying environmental engineering and a member
of the NC State chapter of Engineers Without Borders (EWB).

An NC State EWB team first traveled to Sierra Leone in 2011 to begin assessment for the project. Following discussions with the school, it was
agreed that a mechanically drilled well would best provide a reliable, long-term water supply.

With volunteer assistance from Smith Gardner Inc., a Raleigh-based environmental engineering firm, the team gathered information on the aquifer and soil profiles at the site while building relationships with local government officials, members of the community and charitable agencies working in the region.

The outbreak in West Africa meant that no one from NC State could travel to the country for nearly two years. By spring 2016, the last student who
had visited the school, as a freshman in 2014, had graduated. “We lost some valuable institutional knowledge that comes from spending time in the
community,” said Merrill, who is the chapter’s lead on the water project.

During the travel ban, the team signed a contract with relief and development organization World Hope International for drilling. They continued work
on the design of a distribution system that would be constructed following the well drilling and maintained communication with the school through
email.

NC State EWB also has projects to build a renewable energy system at the same school in Lower Allentown and rainwater catchment systems in a
small community in Guatemala.

“Despite the challenges, we were still very engaged in the project,” Merrill said.

Once the travel ban was lifted, a team of five students and two mentors were able to return to Sierra Leone in December of 2016 to oversee drilling
of the well to a depth of 62 meters and installation of a hand pump, while assessing for the future distribution system. By the time they left, the well
was providing clean water for the students and staff at the school, and school personnel had been fully trained on handpump operation and
maintenance.

The second NC State EWB team working at the Dele School also plans to travel in May 2018 to install a solar photovoltaic and battery storage system
that would provide clean, reliable electricity to students and staff and replace a noisy, expensive diesel generator.